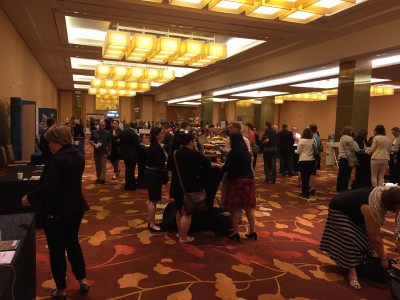 Every year, member business schools of the Executive MBA Council meet this way to be inspired by keynote speakers on current topics related to the industry, to share best-practices through scheduled presentations on the marketing, sales and delivery of top-notch Executive MBA-programmes and to network, all in a genuine spirit of “co-opetition”. Our School is truly proud of having been recommended and approved as a member to this Council.

The theme of this year’s conference was “Global Shift”, which tied so well with the venue: Asia is continuing to gain momentum and Asian countries, business schools and companies are looking into the coming decades – “the decades of Asia” – with great confidence. But what will be the implications for Executive MBA programmes from this global shift?

The two keynote speakers, Dean Ilian Mihov of French INSEAD and Dean Bernard Yeung of the National University of Singapore Business School, each painted the most interesting backdrop, against which the conference discussions later played out. INSEAD is in itself a shining example of the global shift in the way the school is organised and run. Created in Fontainebleau outside Paris in 1957, it had a clear international profile from the start. Today, INSEAD also has campuses in Abu Dhabi and in Singapore. Professor Ilian Mihov was appointed dean of the school in 2013, and he stays based in Singapore, where he has lived for 12 years. Indeed the most symbolic shift in the way INSEAD is run, isn’t it? Out of the 1 000 MBA participants annually at INSEAD, 75% transit between campuses during their programme.

In his keynote, Ilian Mihov took the macro-economic perspective in looking at world economic output, which in 2013 amounted to 74 900 billion USD. The combined output of the US and EU still accounts for almost 50% of that figure, as productivity in these countries is high enough to offset the fact that the US and European populations combined are considerably smaller than those of, say, India and China combined.

Looking at GDP/capita, the spread between countries is still substantial. Using the 2014 US figure of 54 629 USD/capita as a reference, here is how some other countries perform in comparison:

Now, for the decades ahead of us, Ilian Mihov proposes the following macro-economic scenario: as globalisation continues, the GDP/capita of individual countries will gradually converge, so that in 2050 virtually all countries will generate, say, 60 000 USD/capita in today’s money value. He uses Japan as an example of past convergence, brought about by adequate policies for growth: in 1955, the Japanese GDP/capita was a mere 15% of that of US, today it is 66%.

In a future economically converged world, economic clout – as expressed by the total economic output by a given country – will be defined solely by the size of its population.

Such convergence is a challenging forecast, agreed, but actually one that applied historically up until the early 19th century, during which time India and China together were the dominating contributors to the then (very humble) world economic output. Hence, the forecasted convergence will lead to the re-emergence of China, India and other populous Asian countries to the forefront of the world stage.

Will this economic convergence actually happen? Ilian Mihov argues that only serious governmental mismanagement in China and India has the potential to disrupt it. On the note of risks, Bernard Yeung underlined how corporate debt levels in China have reached worryingly high levels in recent years, nearing 200% of GDP. He also described the risks inherent to the Chinese governing model, under which political leaders at regional and local levels are engaged in a “growth tournament”, which may lead to ill-contemplated investment decisions within the larger Chinese economy.

On a positive note, Bernard Yeung went on to share data showing how Asian economies are becoming increasingly Asia centric, in a process led by China. It is estimated that by 2016, the value of Asian intra-regional trade will surpass that of EU intra-regional trade. Asia will not forever remain the manufacturing workshop of the West.

So, in an increasingly Asia-centric era, what are the implications for business schools offering Executive MBA programmes? Here’s Ilian Mihov list of five key requirements on programme features:

It became obvious during the conference days that not all business schools have yet re-designed their Executive MBA programme curriculums to be truly open to these global perspectives of management. I am proud to see that the Gothenburg Executive MBA programme started incorporating this openness, in particular to Asia, already back in 2008. I would argue that our programme design also caters well to the other four key requirements on Dean Mihov’s list, thus making us part of the set of visionary business schools who have already taken these first steps.

Our School of Business, Economics and Law can now safely work on optimizing the focus and design of our Executive MBA programme, closely monitoring the pace and the nature of the on-going global shift towards Asia.

Our Asian programme profile was in focus as I was interviewed on-site by the Hong Kong newspaper South China Morning Post. The interview titled “China’s rise gives EMBAs an Asian flavour” was featured in their “Executive MBA 2015” supplement (pages 10-12).