Observations on everyday life in China 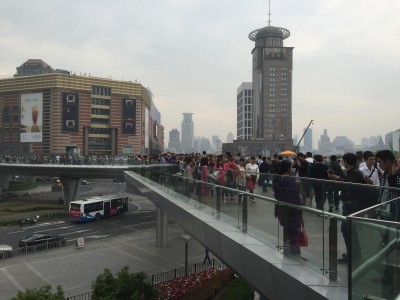 Having walked and driven the streets of megacity Shanghai (24 millions) and neighbouring Hangzhou (3,5 millions) for a week in April, a couple of personal observations on Chinese everyday life surface:

The only place where I saw people biking was on the vast Zijingang main campus of Zhejiang University in Hangzhou. Here, many of the 13 000 students still use bikes to get around. Elsewhere in the city, scooters were abundant, most of them electric and, consequently, deceivingly noiseless.

Saturday seems to be a day for family strolling. In the families I observed, there seemed to be very few exceptions to the one-child policy imposed by the Chinese government since 1980. Starting January 2014, this policy is beginning to be relaxed, mainly for urban couples: families can now have two children, if one parent is an only child. For a Westerner, this type of a policy is in many ways hard to grasp.

There is a palpable sensation of immense national pride over the massive economic development that has taken place in China in the last decades. Strolling at the base of the downtown Oriental Pearl TV tower, one of the famous Shanghai landmarks, there were more selfies and family pictures taken per minute than I have ever seen before.

I was positively surprised by the relatively fluid traffic in Shanghai: I have experienced more gridlocks in Paris or Bangkok than I did in this megacity. Apparently, traffic regulation based on license plates plays a key role here. At the mid-April public auction for Shanghai license plates, these reportedly sold for 12 000 EUR apiece. Please add to that the cost of your preferred car and you are good to go!