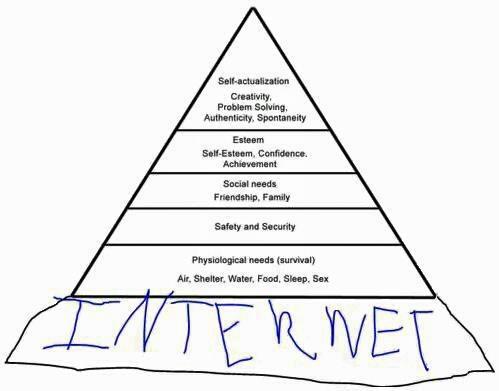 The American psychologist Abraham Maslow studied what motivates people and designed a model where the needs of human beings were arranged in a hierarchy (“A Theory of Human Motivation”, 1943). At the bottom of the hierarchy are the physical needs. Moving upwards, the needs become more sophisticated with self-actualization on top. Maslow’s model has been very influential in explaining human motivation. The hierarchy is often depicted as a pyramid with the basic needs at the bottom. (Dr. Maslow, though, never used the pyramid for visualization.) At the top is “self-actualization” including such needs as creativity. According to this model it is only after the more basic needs are being fulfilled that people can be creative.

I just saw a modified version of the pyramid (see below) where Internet has been added as the most fundamental need. Of course, this is a joke but it may contain a grain of truth. Today, the Internet is ubiquitous and pervasive and we rely on the Internet in our everyday lives. I remember some time ago, we had a power outage in our home. Our children were more concerned that the Internet connection was disrupted than that our home was pitch-dark.