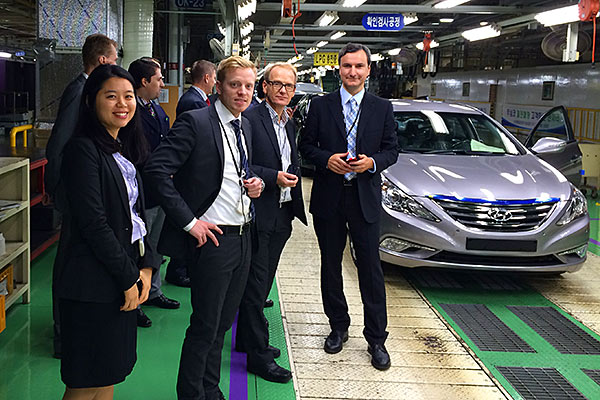 Our discovery of Korea continues. Today, we have had a combination of academic lectures and a field trip to a Hyundai manufacturing plant.

The lectures were dedicated to leadership and marketing in Korea. They led to interesting discussions in the group.

Hyundai Motor Company is in itself one of the miracles of Korea. The company was launched in 1967 and already in the 1970s, the company began to export cars mainly to emerging markets. The first years were a bumpy ride but the company has improved its technology and quality steadily and now Hyundai cars are among the top four best-selling automotive manufacturers in the world. In 2012, the company sold 4.4 million vehicles.

We visited the Asan manufacturing plant with a capacity of 600,000 engines and 300,000 cars annually. The plant employs about 4,400 employees and is quite complete with engine manufacturing, press shop, body shop, paint shop and final assembly.